J Back to SF CDs 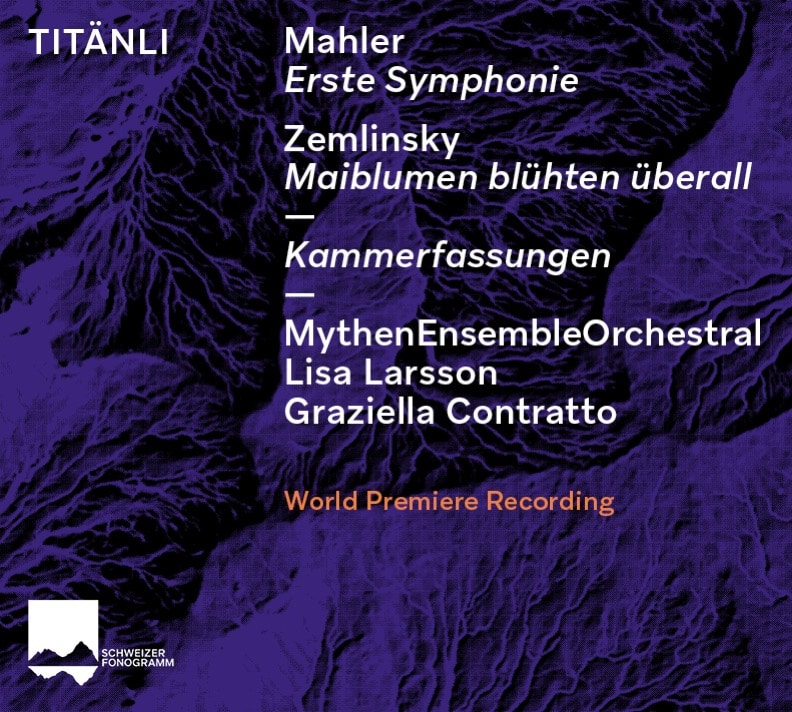 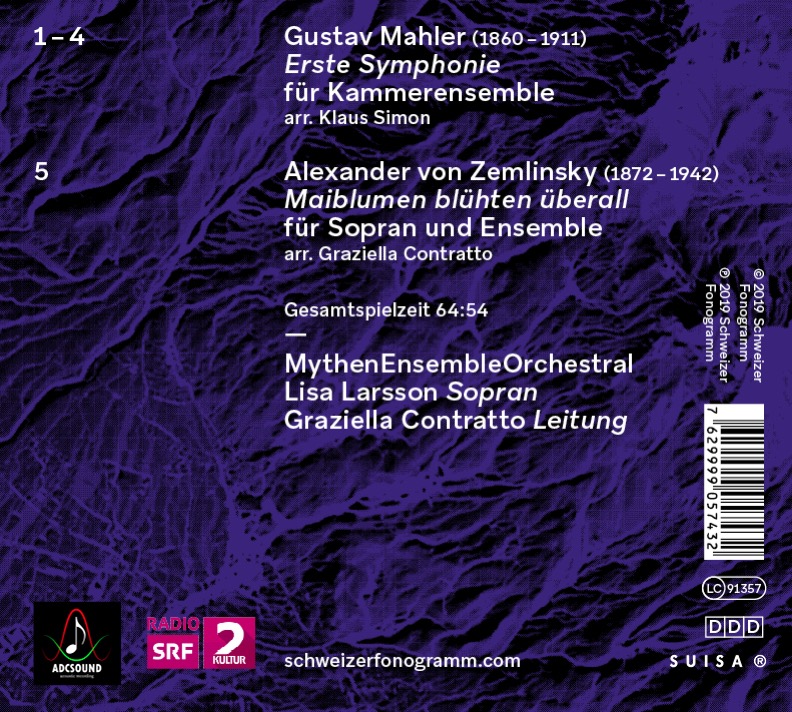 Schweizer Fonogramm puts two arrangements in the focus of the studio production TITÄNLI*: Mahler’s first symphony sparkles in Klaus Simon’s version for 16 instruments and a mixed ensemble accompanies Alexander Zemlinsky’s enigmatic song on Richard Dehmel‘s poem ‘Maiblumen blühten überall’ (arrangement by G. Contratto). The MythenEnsembleOrchestral not only lifts the exuberant confessional music of Mahler’s First in this pocket version, but carries the soprano Lisa Larsson over the early-expressionistic abysses in Zemlinsky’s work who was a colleague and a rival of Mahler, in a certain sense….. Both recordings are world premieres.

*TITÄNLI : Swiss dialect diminutive of ‘Titan’, the original title of Mahler’s First in the Budapest premiere in1889. 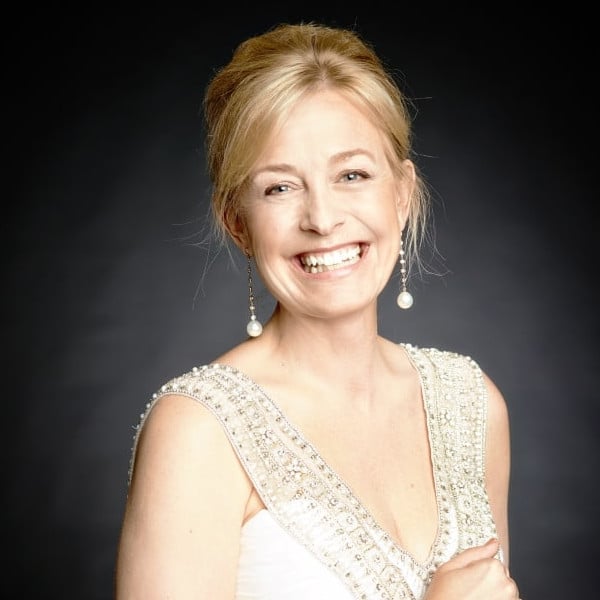 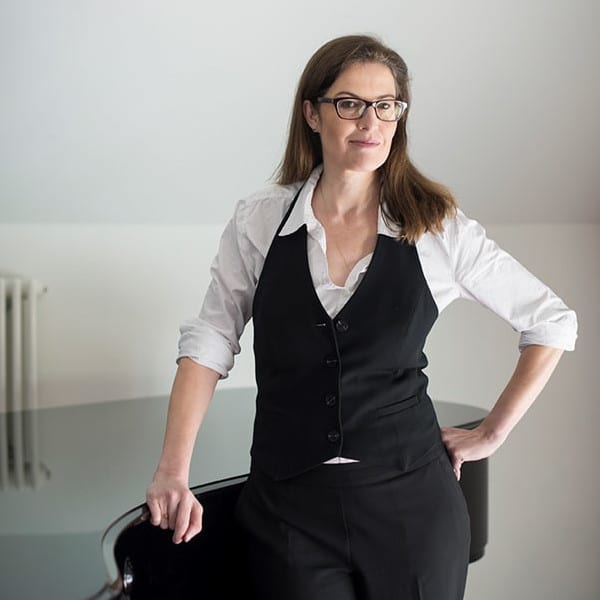 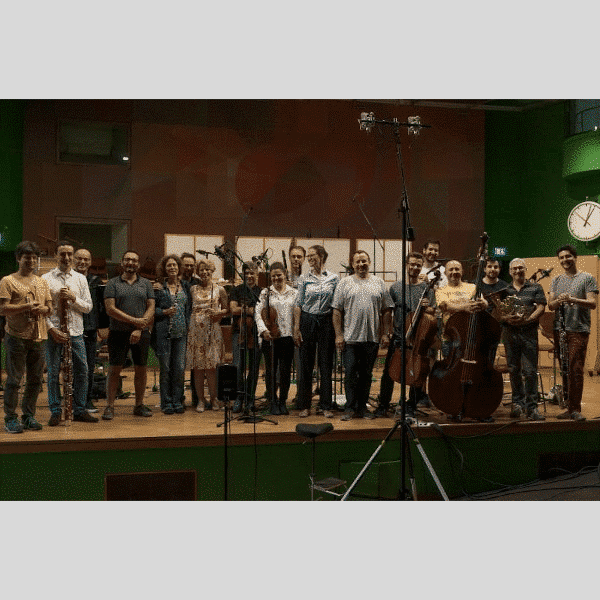 Facing the composer as a friend
Questions for Klaus Simon, arranger of Mahler’s First Symphony

Dear Klaus Simon, could you describe your special affinity with the music of the Viennese fin de siècle ?
Viennese composers before and after 1900 have always been fascinating to me. This epoch is just wonderful in terms of Music, as it leads from the late Romanticism to the early modern era, but Vienna was also a melting pot for general culture : Freud, Klimt, Schiele, Wedekind, just to mention a few, were pioneers in so many other artistic or scientific fiels, too. In the period between 1870 and 1914, Vienna was probably the most important cultural city in the world, despite the strong competition from Paris and Berlin.

Did you ever feel that your respect for the original score was like a burden and, if so, how did you overcome this potential blockade?
I never felt that way. On the contrary: engaging with Mahler’s music is very inspiring for me because he was such a genuinely original composer. In each of his ten symphonies you can discover something new, though familiar. For me, he has become a good friend to whom I will always keep a sort of attachment as long as I live.

When Schoenberg and his students founded the association for the promotion of private performances, there were financial as well as artistic reasons to commission arrangements of symphonic compositions: What inspired you to continue this ‘association work’?
Schoenberg once said that it was about musical truth. Of course, a large orchestral work can impress with brilliant instrumentation. But not all pieces would survive the reduction to an ensemble of 14 or 17 instruments. Sometimes, there are also passages in Mahler’s symphonies (especially in the late work) which are even more intense in the chamber version, since the intimacy can now be even more effective. I actually see my arranging activity in the tradition of Schoenberg’s aesthetics. That was always very important to me. It was never about me, but about the respective work and the question how to arrange it for 14-17 instruments without losing or even alienating the typical sound of the original. I am always happy to hear that this might be the case.

You have already successfully arranged several symphonies and song cycles by Mahler for chamber ensembles: are there still moments when you are reluctant to rethink the scores? Which solutions do you find then? Was there such a passage in Mahler’s First Symphony?
Well, the arrangement of the First Symphony was my first arrangement of a great symphony without rescue ring. At that time, I had arleady arranged Mahler’s Fourth Symphony, which is much more like chamber music than the first, thinking e.g. of the eight horns in the finale!
With Mahler’s First, I found a standard line-up which I have used so far in all my arrangements of Mahler’s 1st, 5th, 6th, 7th. and 9th Symphony. I double the clarinets and the horns, and meanwhile favor the accordion instead of the harmonium, because it is much more flexible and dynamic. Moreover, in contrast to the harmonium, you will find professional players for it. Most of the time, I also add one hapr. It’s just more colorful.
There are no patent solutions, but I know the instruments and their possibilities (I think) quite well, I suppose, and I always write for good musicians, but the arrangements are a challenge. They are harder to play than the original for everyone has more notes to play, especially the winds. The horns and the trumpet happen to complain about the incredible difficulty of there parts.

You are also a successful and versatile conductor with your own ensemble, do you think of certain musicians when arranging and is this helpful?
Yes, sure. In the development process of an arrangement, I sometimes call certain musicians and ask questions such as “How long does a flute take to switch to Piccolo or vice versa?” or “How about that pedal change in the harp – is this possible or not?”. I remember a very high clarinet passage where my clarinetist first groaned but then managed to realize the extremely high tone on the Bb clarinet – a solution which he would never have to do in the symphonic orchestra constellation. Luckily, the passage was very loud. (Of course, that would not have been reasonable in pianissimo …)

Mahler did a lot of orchestration experiments in his First Symphony (even though – as we know today – the recently deceased fellow student Hans Rott may also have contributed some of the original elements). How was it for you to add the accordion / harmonium and piano to this youthful ‚her-I-come‘-instrumentation? It fits, for example, marvellously well in the slow movement, especially in the more Yiddish sections, I would suggest.
The harmonium was indeed used by Schönberg’s association for private musical performances to complement missing wind parts. This is almost a tradition which I gladly took over and without which I personally would not have had the courage to arrange Mahler’s symphonies. I conducted my first performance of my “op. 1”, i.e. the arrangement of Mahler’s Fourth Symphony, in 2007 with my Holst-Sinfonietta and then used the harmonium. Four years later I listened to a performance of “my” Mahler Four for the first time with accordion at Chiemsee and was immediately sure: that sounds much better than the harmonium. One must also know that the harmonium was still in vogue until the twenties of the 20th century, and the accordion was barely known as an instrument for high end culture music. Only Hindemith has dedicated an important part to the accordion in his Little Chamber Music op. 24,1. After that, the accordion went steeply uphill and the harmonium gradually disappeared.
And of course, the piano is wonderfully versatile, has a huge perimeter and can easily replace timpani and other instruments. Without harmonium / accordion or piano you would need many more instruments.

Which compositional fields of the symphony were more complex for you as an arranger: the opulent-monumental or the tender? How do you deal with the contrast effects in Mahler’s music when the overwhelming power of the sheer volume of the symphonic orchestra virtually disappears?
It is much easier to produce subtle effects than to emulate the tutti of a hundred-strong orchestra with just 16 musicians. The finale of the First Symphony is sometimes very powerful, sometimes it comes to a limit with a soloist string section, and I was amazed when I could observe my own ensemble that it can work. But you need very sensitive musicians who play very well together, otherwise it will be difficult. A forte in the trumpet is of course a different forte than on a flute in the same pitch. Two horns and a trumpet can sound pretty powerful!
I was also helped by the score knowledge of Schoenberg’s First Chamber Symphony in E major op. 9, which also has a lot more wind instruments than strings. This is a wonderful piece to learn how to arrange in a convincing balance.